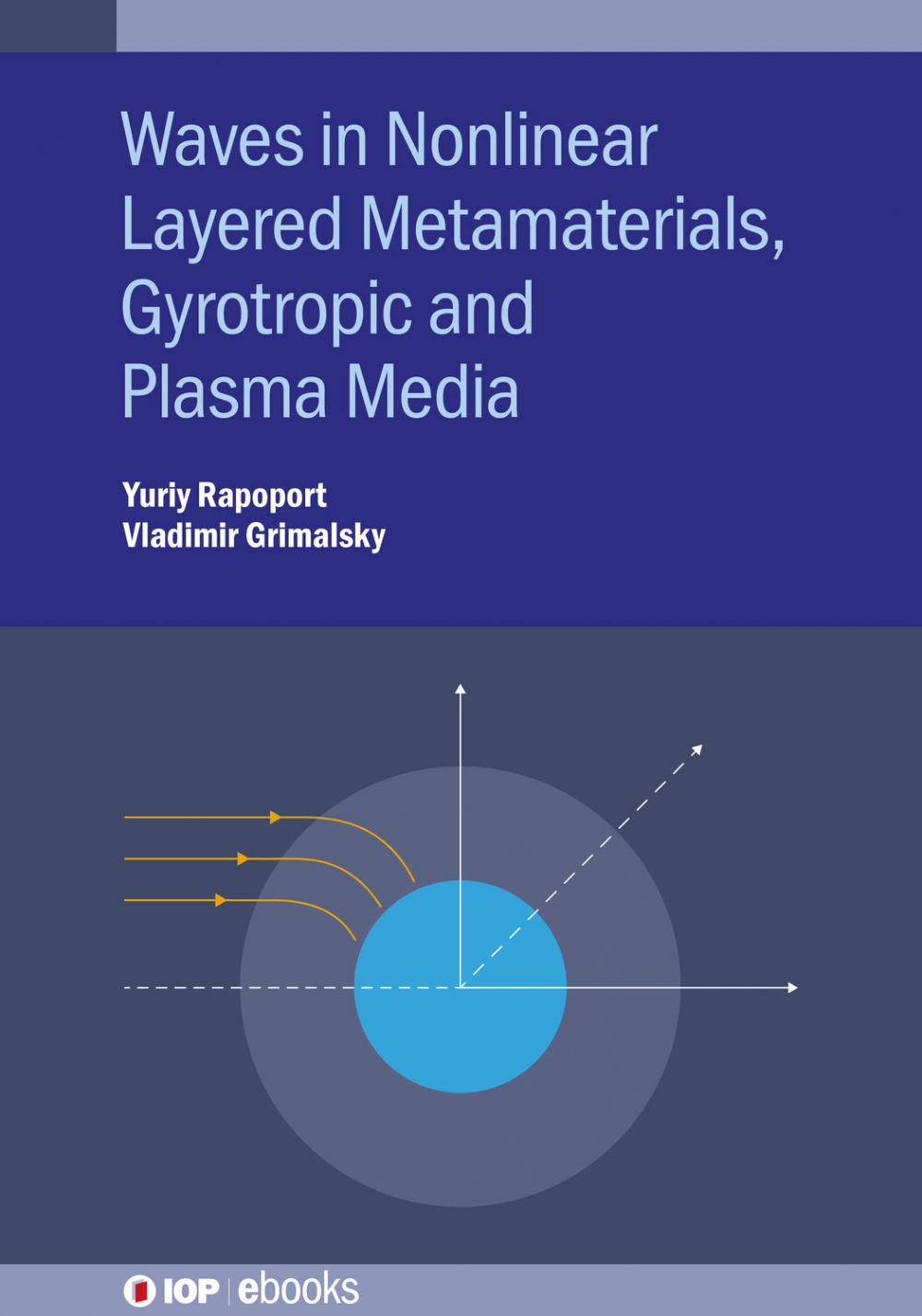 The purpose is to give a wide, tutorial-driven, presentation of the theory of wave processes occurring in layered nonlinear metamaterials (MM), gyrotropic and plasma media; to determine the regularities of electromagnetic wave propagation and formation of wave structures; to investigate the new wave structures (solitons etc.) and effects in MM, gyrotropic and plasma media with bulk, surface, resonant, moderate, strong nonlinearities; to study the effective methods of control of wave processes due to the use of inhomogeneous and non-stationary external fields.

This book is aimed at graduates and postgraduates studying physical science and engineering, and can be used for training courses for specialists in meta- and nanophotonics and nanoelectronics.

Volodymyr Grimalsky graduated from T. Shevchenko Kiev State University (KSU), former USSR (now Taras Shevchenko National University of Kyiv, Ukraine), in 1982 with the honorous diploma on the theoretical physics. Grimalsky is the author of more than 200 papers in refereed journals, conference proceedings, and book chapters. His scientific interests are with the linear and nonlinear propagation and interaction of electromagnetic and acoustic waves in complex media including metamaterials; physical fundamentals of semiconductor devices of high frequencies including terahertz range; and investigation of the physical fundamentals of electromagnetic and acoustic processes in ionosphere connected with seismic and volcanic activity phenomena.

Yuriy Rapoport was graduated from Taras Shevchenko National University of Kyiv, Ukraine and is now Leading research fellow at the same University, Faculty of Physics. He is Ph. D. (1986) and Dr. of Phys. Math. Science (2017). He has been leader and executor of more than 10 Ukrainian and international scientific projects. He has around 140 scientific  publications including 122 publications with 1031 citations in SCOPUS  data base.  He has presented and was co-author of the set of invited papers on the international conferences and was a co-author of a set of invited papers and monograph chapters. His scientific interests include nonlinear wave processes in the active layered and inhomogeneous media of different physical nature: metamaterials, plasma-like structures, ferromagnetics; nonlinear processes in active hyperbolic and quantum graphene metamaterials, including Graphene Metamaterial Electron Optics; ultra-high quality nonlinear resonances and vortex formation in active nonlinear metamaterials and metasurfaces in THz and optical ranges; vortex-based wireless communications, with increased information capacity and robustness respectively to environment influence; mechanisms of the synergetic coupling in the system Earth-Atmosphere-Ionosphere-Magnetosphere.

METAMATERIALS WITH ACTIVE METAPARTICLES. ABSOLUTE AND

CONVECTIVE INSTABILITY IN THE ACTIVE METAMATERIALS

GENERAL METHOD OF THE DERIVATION OF NONLINEAR EVOLUTION

EQUATIONS FOR LAYERED STRUCTURES (NEELS) WITH THE VOLUME

PARAMETRIC INTERACTIONS OF THE NONLINEAR WAVES IN ACTIVE

FORMATION. PROPAGATION AND CONTROL OF BULLETS IN METAMATERIAL WAVEGUIDES WITH HIGHER-ORDER NONLINEAR EFFECTS AND MAGNETOOPTIC INTERACTION

CONDITIONS FOR TRANSITION TO THE MODE OF STRONG

CONCLUSIVE CHAPTER. DISCUSSION AND CONCLUSIONS. THE FUTURE SCIENTIFIC PROBLEMS AND PERSPECTIVE APPLICATIONS OF THE NONLINEAR WAVE PROCESSES IN THE METAMATERIALS